Bangalore may have been knocked out of Indian T20 Cricket but they still can play the spoiler when they face Hyderabad in the match at the Chinnaswamy Stadium in Bangalore on Saturday. Bangalore have nothing to lose and will look to go all out while Hyderabad must win the last game and then hope Kolkata and Punjab don't win their games.

Hyderabad goes into the match following the heart-breaking Super Over loss to Mumbai . While they managed to restrict Mumbai with the ball, their batsmen couldn't chase down a getting target. In the absence of David Warner, it needed a special effort from Manish Pandey to take them into the Super Over, a knock that eventually went in vain.

With both Warner and Jonny Bairstow went, there will be massive responsibility on skipper Kane Williamson to make an impact. All-rounder Vijay Shankar, as well as the experienced Bhuvneshwar Kumar and Mohammad Nabi, will be the other ones who will be expected to perform well. As a team, Hyderabad will need to raise the bar although Rashid Khan and Khaleel Ahmed have impressed with the ball. 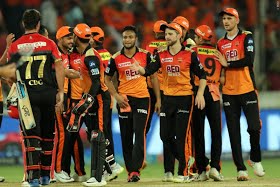 Bangalore's mid-season recovery could not help them overshadow what was an endless losing streak. Bangalore have been heavily dependent on skipper Virat Kohli and AB de Villiers and it has reflected in the results. Both have scored 400 plus runs in the series but it hasn't been enough as hardly anything has come from the rest.

Bangalore's bowling is centered around the trio of Yuzvendra Chahal, Umesh Yadav, and Navdeep Saini. Yet again, they would want to stand up and make a difference. The economy of Yadav though remains a worry as he has constantly leaked runs, and it has hurt the team. RCB would be keen to sign off on a high.