Player Of The Match Ekta Bisht 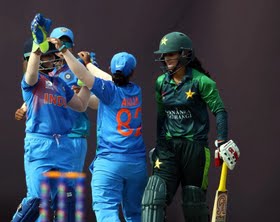 The India Women versus the Pakistan Women game was the most anticipated game in the Womens Asia Cup T20 2018. The fans had to wait long for this game since this was scheduled on the last day of the league stages of the tournament. Moreover, what was more exciting is that this was a do or die game for both the teams which made it more interesting.

Both India Women and Pakistan Women had six points each before this game commenced. Since it is quite obvious that Bangladesh Women would win against a much weaker Malaysia Women, the winner of this game would make it to the final.

Pakistan Women opted to bat first after winning the toss. However, this decision didn’t pay great dividends for them. India Women were absolutely ruthless with the ball. They dismissed the inform Pakistani openers and skipper Maroof to restrict Pakistan to a small total.

Team India is entering into the Asia Cup Final for seven consecutive times. And they beat Pakistan to enter this year's final. if Bangladesh defeat Malaysia team in today match, India will face Bangladesh in the Asia Cup 2018 finals. Remember Bangladesh is the only team to defeat India in the league stages. So Its going to be a good final game.