India clinch a low scoring thriller to avoid a cleansweep

India clinched a low scoring thriller at Delhi to avoid an embarrassing cleansweep against their arch rivals. Needing just 168 to win, Pakistan stuttered big time to lose the Third and Final ODI by 10 runs.

India clinched a low scoring thriller at Delhi to avoid an embarrassing cleansweep against their arch rivals. Needing just 168 to win, Pakistan stuttered big time to lose the Third and Final ODI by 10 runs. The Indian victory was scripted by new boys – Bhuvneshwar Kumar and debutant Shami Ahmed while Ishant Sharma raised his game to help MS Dhoni to defend such a low total.

India was in shock as their decision to bat first after winning the toss looked to have backfired. The top order had a familiar collapse against the moving ball and India was struggling at 63 for 4 in the 16th over. The pair of Suresh Raina (31 from 60 balls with 2 fours and a six) and MS Dhoni (36 from 55 balls with a four and 3 sixes) did their best to revive India but perished before they could achieve anything big. Ravindra Jadeja, who was left with the tail, chipped in with an entertaining 27 with two sixes. India was bowled out in 43.4 overs for 167. Saeed Ajmal who came in after the pacers had done most damage, went onto claim figures of 5 for 24. 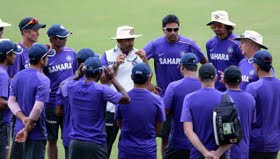 Pakistan in the run chase were made to work hard for their runs with the new ball pair of Bhuvaneshwar Kumar and Shami Ahmed making the ball move around at brisk speeds. Pakistan despite batting out slowly had plenty of wickets in hand. The match turned on its head when Misbah-ul-Haq (39 from 82 balls) got caught at legslip off Ashwin. Pakistan from 113 for 3 in the 35th over slipped to 125 for 6 losing three middle order wickets.

The likes of Jadeja and Shami Ahmed bowled some tight overs in the slogs to push the equation out of Pakistan’s reach. Mohammad Hafeez who came in at no.7 because of a finger injury caused by a MS Dhoni shot was Pakistan’s last hope. Hafeez (21) threatened to take the game away but got out in the crunch situation slogging Ishant Sharma in the deep. Pakistan were bowled out for 157 in 48.5 overs with Ishant taking 3 for 36. Shami Ahmed with 9-4-23-1 and Bhuvneshwar Kumar with 10-2-31-2 were outstanding. Ravindra Jadeja played a crucial hand with his figures of 10-2-19-1 though he lost out on the Man of the Match award which was surprisingly given to Dhoni. The Man of the Series award was given to Nasir Jamshed who scored two centuries.

Toss and Teams: India have won the toss and elected to bat first in the third and final ODI against Pakistan at the Feroz Shah Kotla in Delhi. The hosts have made two changes with Ajinkya Rahane and debutant Shami Ahmed coming in for Virender Sehwag and Ashok Dinda. Skipper MS Dhoni who was doubtful to play because of a back problem has passed the fitness test this morning. Pakistan have made one change with Umar Akmal replacing Azhar Ali.