West Indies continued their impressive comeback in the series by restricting India to 234 for 5 at the end of day one at St Lucia. Having won the toss, and put the opposition in, West Indies had India in all sorts of strife at 126 for 5.

West Indies continued their impressive comeback in the series by restricting India to 234 for 5 at the end of day one at St Lucia. Having won the toss, and put the opposition in, West Indies had India in all sorts of strife at 126 for 5. It could have been worse for India but for a couple of fielding lapses from the hosts. Thanks to Ravichandran Ashwin, who continued to bat at number six, and Wriddhiman Saha, who added an unbeaten 108 for the sixth wicket, India managed to finish with a somewhat decent score. But, they will still need a big effort from the lower order on the second day to finish with a competitive first-innings total.

Having been thwarted at Jamaica on the last day, India made some questionable decisions, which could hurt their chances in the Test as yet. Although fit, Murali Vijay was not picked, and Cheteshwar Pujara, after only two poor Tests, was dropped in favour of Rohit Sharma, who had done nothing in the interim to merit a comeback. In the bowling too, there were changes. Leggie Amit Mishra, again after a couple of poor efforts, was left out for Ravindra Jadeja while Bhuvneshwar Kumar was brought in for Umesh Yadav. How much the changes in the bowling department with aid India, only time will tell, but the batting mash-up hurt them on the opening day.

To accommodate Rohit, the batting order had to be rejigged. Both skipper Virat Kohli and Ajinkya Rahane had to bat one position above in the batting order, and it did not help them, as they clearly looked uncomfortable. In fact, India looked indecisive right from the start, and the West Indies pacers took advantage of this uncertainty in the batting line-up, and a fresh pitch. Shikhar Dhawan is a lottery wicket early in the innings, and he fell unable to deal with the barrage of short balls delivered by Shannon Gabriel and impressive debutant Alzzari Joseph. The left-hander tickled a rising delivery from Gabriel down the leg side, to give West Indies the early breakthrough.

With no Pujara, skipper Kohli walked in at number three. This is not a position he enjoys batting in, but he took up the challenge again, albeit unsuccessfully. He tried to cut a delivery that was too close to his body, and only succeeded in nicking Joseph behind the wickets. Kohli's dismissal brought in Rahane who, yet again, was enthrust with the responsibility of rescuing the innings. He and Lokesh Rahul set about rebuilding the innings, the latter in a confident fashion, as drove with ease even on the challenging surface. Rahul eased to yet another half-century, but fell just a few minutes before lunch, whipping one from Roston Chase to short fine leg. 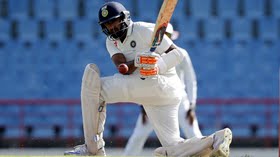 Rohit's Test woes continued on comeback as he pushed at one tentatively outside off-stump, to give Joseph his second wicket. Rahane, on the other hand, went into his shell, and put the shutters on the scoring. However, he fell for 35 from 153 balls, trying to sweep Chase. With the ball softening in the final session, Ashwin and Saha had it easier, but to their credit, they kept their wickets in tact. Ashwin had two lucky breaks though. He inside ended Chase, but was dropped at short leg, and later, he was caught off a short ball at point, but Gabriel had overstepped. On day two, Ashwin would be looking to bring up his fourth Test hundred, against his favourite opposition.