Half centuries from the trio of Warner, Hughes and Clarke placed Australia in a comfortable position of 299 for 4 on the opening day’s play of the First Test at Hobart against Sri Lanka.

Half centuries from the trio of Warner, Hughes and Clarke placed Australia in a comfortable position of 299 for 4 on the opening day’s play of the First Test at Hobart against Sri Lanka. At stumps on Day 1, the Aussies have Skipper Michael Clarke batting on 70* (from 136 balls with 7 fours) along with Michael Hussey who is on 37* (from 81 balls). 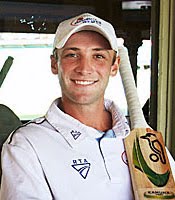 Batting first after winning the toss at the Bellerive Oval, the Aussies lost an early wicket when Ed Cowan top edged a pull off left-arm seamer Chanaka Welegedara to mid on. David Warner and Phil Hughes then repaired the damage with a 79-run stand before the former was run out at the stroke of lunch. Warner stroked his way to 57 from 89 balls with 8 fours before that.

In the fag end of the afternoon session, Welegedara struck for the visitors when he had Shane Watson (30) edging a drive to the slips where Skipper Mahela Jayawardene took a diving catch to his right. After Tea, Phil Hughes departed after a well made 86 (from 166 balls with 8 fours and a six) getting bowled off an inside edge to Welegedara, Sri Lanka’s most successful bowler of the day. The experienced duo of Clarke and Hussey then saw off the day with an unbroken stand of 101 runs.