Rohit Sharma to make his Test Debut at Sydney?

Mumbaikar Rohit Sharma is most likely to make his Test Debut tomorrow at the Sydney Cricket Ground in the Second Vodafone Test Match between Australia and India.

Mumbaikar Rohit Sharma is most likely to make his Test Debut tomorrow at the Sydney Cricket Ground in the Second Vodafone Test Match between Australia and India. Rohit Sharma will get his chance if the Team Management decides to axe Virat Kohli, who scored 11 and a first-ball duck in the Melbourne Test which India lost by 122 runs.
The 24-year-old Rohit Sharma has had an impressive tour so far scoring 56*, 47 and 38* in the two warm-up matches against Cricket Australia Chairman's XI at the Manuka Oval ahead of the First Test. Rohit was expected to play ahead of Kohli in the MCG Test but the Team Management favoured the latter. 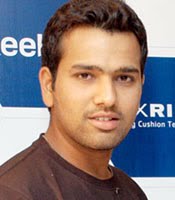 Although, Rohit is just about to make his Test Debut, he is reasonably experienced at the international level having played 72 ODIs and 22 T20Is till date. Rohit's international career had started in 2007, although there is no doubt about his talent, his consistency has been a problem. However, Rohit has improved on that aspect of late which has got him a place in the Test Squad. So far he has scored 2 centuries, 11 half centuries in ODIs along with 4 half centuries in T20Is.
At the first class level, Rohit Sharma has 12 centuries to his name with a superb batting average of more than 63.00. Sydney could be the venue where a potentially good Test batsman in Rohit Sharma will be making his debut in this format of the game. The lad has the making of becoming a successful batsman in the Australian conditions because of his backfoot game which has impressed even the likes of Ian Chappell and others.