Led by a fluent half-century from former Skipper Mahela Jayawardene, Sri Lanka defeated Emerging Cape Cobras by a comprehensive margin of 78 runs in a warm-up one-dayer yesterday at Brackenfell in Boland.

Mahela Jayawardene scored 74 from 70 balls with 9 fours and a six while opener Upul Tharanga got 55 facing 72 balls with 4 fours and a six. Sri Lanka batting first after winning the toss posted 296 for 9 in 50 overs. For the Cobras team, Alistair Gray with his leg breaks picked up three wickets. 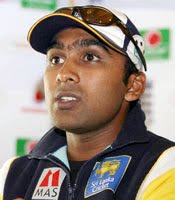 Alister Gray then came good with the bat scoring 93 from 126 balls with 8 fours and 2 sixes after opening the batting for Emerging Cobras. Unfortunately his batting colleagues didn’t the provide the necessary support at the other end. The Cobras were bowled out for 218 with the Sri Lankan spinners Ajantha Mendis and Rangana Herath taking three wickets each.

The First ODI between South Africa and Sri Lanka will be played tomorrow at Paarl.