England have kept their hopes of going through into the Semis alive by defeating the Kiwis at Pallekele. It was a pretty easy chase for England after they kept New Zealand down to 149.

England have kept their hopes of going through into the Semis alive by defeating the Kiwis at Pallekele. It was a pretty easy chase for England after they kept New Zealand down to 149. New Zealand have now lost two games in the Super Eights and are very much on the brink of elimination from the tournament.

New Zealand crawled back into the game when they had England at 38 for 2 in 6.2 overs with the spinners managing to curtail the scoring rate. However, through Luke Wright and Eoin Morgan, England was absolutely steady in the run chase. This third wicket pair added 89 runs before Eoin Morgan (30 from 31 balls) got caught in the deep with the match almost sealed. 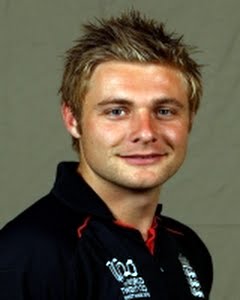 Luke Wright came up with the power hitting mostly in the second half to score a sizzling 76 from 43 balls with 5 fours and 5 sixes. As a result of Wright’s knock, England won the match comfortably by 6 wickets with 7 balls to spare. Luke Wright got the Man of the Match award ahead of Steven Finn.

New Zealand Innings: New Zealand struggling at 67 for 4 in 11.4 overs at one stage did well to reach a competitive total of 148 for 6 against England on a slow dry pitch at Pallekele. James Franklin, coming in at no.6, scored a crucial 50 (from 33 balls with 4 fours and 2 sixes) to put the Kiwis back in the contest. Nathan McCullum struck a couple of sixes towards the end to boost the Kiwi score.

It was tough going for New Zealand as Steven Finn bowled brilliantly using pace and bounce to good effect. Finn finished with superb figures of 4-0-16-3 which included the big wickets of Brendon McCullum and Ross Taylor. Graeme Swann with 4-0-20-1 and Tim Bresnan with 4-0-29-0 did a fine job for England.

Toss and Teams: New Zealand have won the toss and elected to bat first in the crucial Super Eights Match against England at Pallekele. The loser of this match is going to be eliminated from the tournament most probably as both England and New Zealand have lost their first game of the Super Eights.

The Kiwis have made one change with Doug Bracewell replacing Jacob Oram who is not well. England have made two changes with Tim Bresnan and left-arm spinner Danny Briggs coming in for Jade Dernbach and Samit Patel.