Having pulled off their highest chase in T20Is, against West Indies at Hyderabad, hosts India will aim to clinch the series with a victory in the second match at Thiruvananthapuram

Having pulled off their highest chase in T20Is, against West Indies at Hyderabad, hosts India will aim to clinch the series with a victory in the second match at Thiruvananthapuram on Sunday. The Indian bowlers conceded 207 for 5 bowling first. However, another master-class from Virat Kohli (94), and a fluent half-century from KL Rahul (62) led India to an emphatic victory.

While India did win the game comfortably in the end, they will have to show significant improvements in the bowling and fielding department in the second match. Except for Ravindra Jadeja, all the other bowlers went at an economy rate of 9 or above. Deepak Chahar was the most expensive, conceding 56 in his four overs, while Washington Sundar conceded 34 in his three. Yuzvendra Chahal (2 for 36) and Bhuvneshwar Kumar (0 for 36) also went for a few runs. 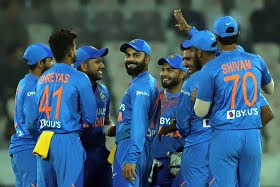 India would be pleased with their batting performance though as Kohli and Rahul featured in a sublime 100-run stand for the second wicket. Under-fire, wicket-keeper batsman Rishabh Pant began his innings with a six but perished for 18 off nine balls.

West Indies, despite the loss, will be pleased with their batting effort as Shimron Hetmyer made a breezy 56 while Evin Lewis and skipper Kieron Pollard smashed it around to gather 40 and 37 runs respectively. Even Jason Holder made a key contribution with an unbeaten 24 off 9.

Like the Indians though, the Windies bowlers also struggled. They gave away 23 extras, including 14 wides and three no-balls, unacceptable in a T20I game. Kesrick Williams had a forgettable day, going for a record 60 runs in 3.4 overs while Jason Holder and Khary Pierre went for 46 and 44 respectively in their four overs.