Carlos Brathwaite smashed four consecutive sixes off Ben Stokes in the final over of the World T20 as West Indies won the final against England under sensational circumstances, in front of an impressive crowd at the Eden Gardens, Kolkata

Carlos Brathwaite smashed four consecutive sixes off Ben Stokes in the final over of the World T20 as West Indies won the final against England under sensational circumstances, in front of an impressive crowd at the Eden Gardens, Kolkata. The match seemed in England’s grasp after another brilliant over by Chris Jordan left West Indies 19 to get off the last over. But, Brathwaite hit four breath-taking sixes to snatch the match away from England. The first one was heaved to deep backward square leg, the second over long-on, the third in the opposite direction, and the fourth and final one to deep midwicket to leave England stunned, and Stokes in tears.

Earlier, West Indies recovered from a horror start courtesy Marlon Samuels, who ended up unbeaten on a classy 85 from 66 balls. Samuels, who was given caught behind earlier in his innings, but was reprieved as replays were inconclusive, featured in a dominating fourth-wicket stand of 75 with Dwayne Bravo (25). Samuels kept finding the boundaries every time West Indies looked under pressure. It however all came down to the last over as Jordan and David Willey bowled brilliant overs to keep England ahead. Brathwaite and Samuels had a tough task on hand, but the former made it seem a canter. 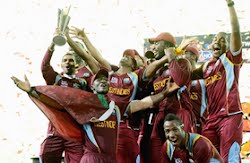 Defending 155, England made a surprise move, bringing in Joe Root to bowl the first over, and the man with the golden arm delivered, sending back both the openers Chris Gayle and Johnson Charles in the same over, as the batsmen tried to hit out against him, but only managed to loft balls straight to the fielders. Last match’s hero, Lendl Simmons, then experienced the other side of the coin as he was trapped plumb in front by Willey to leave West Indies tottering at 11 for 3 in the third over. Samuels, however, played another big innings on the big day.

Before that, West Indies’ bowlers backed their captain’s decision to win the toss and field first in the final, restricting the Englishmen to 155 for 9. Samuel Badree once again stood out for West Indies, with excellent figures of 2 for 16 while Dwayne Bravo and Carlos Brathwaite contributed with three wickets. For England, Joe Root was again their best player, with a fluent 54 from 36 balls while Jos Buttler chipped in 36 from 22 deliveries. At one stage it seemed England would struggle to reach 150, but David Willey smashed a couple of sixes to give England a competitive score.

Badree gave West Indies a brilliant start in the big final, cleaning up the dangerman Jason Roy for a duck, second ball of the innings with a slider that went straight through Roy’s defence. Alex Hales’ poor World T20 continued in the final as well the opener picked up a poor ball, and hit it straight to short fine leg, where there was only one fielder. Things got worse for England as skipper Eoin Morgan’s bad run carried on into the final as well. He failed to pick a googly from Badree, and only managed to edge one straight to Chris Gayle at slip. At the end of the power plays, England were in strife at 33 for 3.

The recovery for England was led by the ever-dependable Root, and the growingly consistent Buttler, who featured in a key fourth-wicket stand of 61. The duo was was extremely harsh on Sulieman Benn, smashing him for a couple of fours in his first over, punching one through covers, and then whipping one through mid-on. When Benn was recalled later, Buttler blasted him for a six over extra cover, and then got two more in the left-arm spinner’s next over, swinging his arms freely. Brathwaite got the big wicket as Buttler picked out midwicket. England crumbled from that point, with Root being 7th out at 111. Willey, however, gave England the late impetus. It just wasn’t enough though.