What Ashwin must learn from Harbhajan Singh’s mistakes

Indian off-spinner Ravichandran Ashwin recently became the number one all-rounder in Test cricket following his magnificent century against the West Indies at Eden Gardens, his second in the format, and both coming against the same opponents.

Indian off-spinner Ravichandran Ashwin recently became the number one all-rounder in Test cricket following his magnificent century against the West Indies at Eden Gardens, his second in the format, and both coming against the same opponents. It is a fantastic achievement for someone still very young in international cricket. Ashwin has so far only featured in 17 Tests matches, and is nearing in on 100 Test wickets. Ashwin’s contribution with the bat is extremely significant considering that India are still hunting for that elusive all-rounder. But, while he can enjoy his good run with the bat, he must be careful of another factor, pertaining to his main skill, his off-spin bowling. 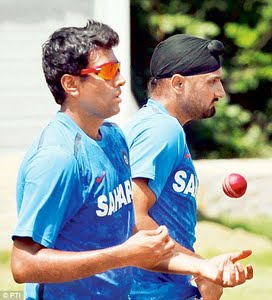 Ashwin has replaced the veteran Harbhajan Singh in the Indian team. It would be prudent to note that even Harbhajan compiled a couple of brilliant hundreds down the order in Test matches. Yet, it wasn’t long after that when he was actually dropped from the team. The problem was that while Harbhajan’s batting went from strength to strength, his bowling prowess went down accordingly. May be Harbhajan’s powers had waned, but he did not look like an iota of the bowler he was at his peak. This was after he had got more than 400 Test victims.

One theory could possibly be that he concentrated a little further on his batting since he was doing so well, and may have assumed that he is a skilled bowler so won’t have to work that much on his bowling in the nets. Whatever the case the fact was that with each good innings with the bat, Harbhajan’s performance with the ball became equally disappointing. It is true that being an all-rounder is a very herculean task, and Harbhajan definitely wasn’t one, which is probably why his bowling suffered. In his last few matches, when India needed Harbhajan the bowler, he just wasn’t there.

Ashwin must take a leaf out of Harbhajan’s case, and ensure that he doesn’t go the senior off-spinner’s way. Whatever runs he gets with the bat will definitely help, particularly when he gets it under tough circumstances, like the one that Eden Gardens in the opening Test against the West Indies. At the same time, he must make sure that his bowling doesn’t suffer, because it is due to his off-spin talent that he is primarily in the team. As of now he seems to be on the right track, since he did pick up five wickets at well in the Eden Test.

Coming back to Ashwin’s batting, one shouldn’t be surprised with his success. He was an opener after all in his early cricketing career. Ashwin possesses the technique as well as the mindset to play the long innings. He is a rather elegant batsman, who rarely slogs the ball. It would be too early for India to look up to him as an all-rounder. But, if he can chip in with the bat frequently enough while ensuring that his bowling is going from strength to strength, he will be doing his job well. --By A Cricket Analyst